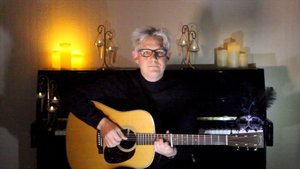 Filming the video for The Mistletoe Bride

MARTIN MEDINA is a composer and multi-instrumentalist best known for his work on Rip Off Britain (BBC One), Food: Truth Or Scare (BBC One),  The Untold (Radio 4), Don't Log Off (Radio 4) and Jo Brand's Christmas Log (Channel 4).

'For Don't Log Off, Martin has created a very atmospheric collection of musical beds which offer up a beautiful, comforting and memorable soundscape for our listeners.'

'Martin’s music has been a key ingredient in the success of Don’t Log Off, for which he has provided an original and distinctive soundtrack. He is a fine collaborator and a great pleasure to work with. I wouldn’t hesitate to recommend him.'

'I have commissioned a number of scores from Martin and have never been less than delighted with the results. He has a wonderful musical imagination and can respond both precisely and creatively to a brief. The subtlety of his orchestrations, his fine deployment of musical forces to interpret ideas is 100% professional, and I would always be pleased to make Martin my first port-of-call for a thoughtful, ingenious and ultimately sophisticated musical score.'

'Martin sensitively scored various episodes of Lives in a Landscape on BBC Radio 4.  Taking both direction from the producer and responding creatively to the material, his soundtracks were both subtle and effective.'

'Martin is a talented and perceptive musician.  We have worked on a number of projects together that showcased his ability as both composer and musician.  He is a delight to work with and is able to make the music work unobtrusively but very effectively.'

'I have worked with Martin on various projects. He quickly gets to grips with the creative brief and very soon he’ll have laid down a first pass of the title music you’ve asked for - then you take it from there. Would highly recommend...'

'Martin is a joy to work with - smart, encouraging and imaginative.  I've thoroughly enjoyed collaborating with him.'

'I particularly like the way nothing seems too much trouble; Martin responds very positively to notes and feedback where required and is happy to go the extra mile until everyone’s happy...'

'Martin is a bold and original composer unafraid of using a striking sonic palette.'